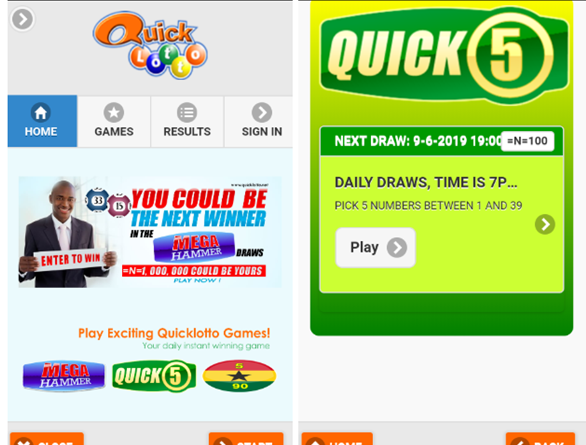 If you want to play instant scratchies and lottery-type draw games then Quicklotto is the online site for Nigerians to do so. Quick lotto is owned by Fortune Games Limited which is an ICT company that has been engaged in the lottery business for the past eight years. To play the games with Naira at Quick lotto you need to be 18 plus years of age.

Games to play at Quick Lotto

As said above Quick lotto offers Instant Scratch Off Games and Draw Games. They have two sub-games underneath the instant scratch-off games, namely Cash Winfall and Car Lucky Loot. The games in this category allow you to get your result instantly to know if you won the games or not and your winnings will be credited into your account almost immediately and it amounts to prizes worth N10 Million, while the Car Luck Loot allows you to partake in the game of winning a Mercedes Benz 300E 2014 series and this could be won almost instantly.

There are also two Draw Game in this category that provide various levels of jackpots that is Quick 5 and MegaHammer.

The Quick5 provides a low level of difficulty where a player is expected to pick 5 numbers between 1 and 39. The estimated jackpot starts from 1 Million Naira daily or approximately $6,200.00 and can grow to any amount until a winner or winners emerge. This is played daily with draws at 9:55PM.

Each play online has 5 play areas with boxes numbered 1 to 39. Fill in the numbered boxes corresponding to the numbers you have chosen to play or select the autoselect option. Pick your numbers carefully, as a Quick5 ticket cannot be canceled. Players are charged 200NGN/$2 for each play you’ve selected times the number of drawings played. You have to save and print tickets online.

Quick5 cash prize amounts for matching 3, 4 or 5 numbers are pari-mutuel, all winners share an equal portion of the winnings in each prize category.

The most difficult game to win is MegaHammer. The MegaHammer starts from a minimum jackpot of 10 Million Naira or approximately $100,000.00 and could grow to billions of Naira until a winner or winners emerge. Draws are made once a week on AIT at 9:55PM on Saturdays.

Just choose five numbers and a mega number, for 200NGN/$2 per play, for a chance to win up to =N=25 Million or a jackpot prize of =N=10 Million cash! draws held daily.

Each play online has 5 play areas with 2 sets of boxes numbered 1 to 59 and 1 to 39 respectively. Fill in the numbered boxes corresponding to the numbers you have chosen to play or select autoselect option. Pick your numbers carefully, as a Megahammer ticket cannot be cancelled. Players are charged 200NGN/$2 for each play you’ve selected times the number of drawings played. You have to save and print tickets online.

Megahammer cash prize amounts for matching numbers are pari-mutuel, all winners share an equal portion of the winnings in each prize category.

How to play at Quicklotto with Naira?

You can play all the Quicklotto games either online or with your mobile or at the POS terminal.

You must perform a one-time registration on the QuickLotto site Quicklotto, in order to have authorized access to the games. Then print your tickets and keep them in your safe custody.
You can play using a phone or mobile by selecting numbers and sending them to the specialized codes. For those playing the Quick 5, the shortcode is 31113 while for the Megahammer is 31114. The telephone players are limited to Nigeria networks. The server allows players to send words such as ”pic’ ‘pik’ or ‘pick’ to receive computer-generated tickets for their games.

Quick lotto have direct and indirect access to over 100,000 POS terminals across the country. The ATMs have become a veritable financial outlet for catering to the needs of millions of Nigerians. Quicklotto has opened up ATMs for those willing to buy QuickLotto tickets. Most banks in Nigeria have embraced this service. They have also partnered with Interswitch so people can play and pay using their quick teller platform.

To know if you are a winner or not QuickLotto draws will be televised on the AIT station by 10:00PM daily for the quick 5 while the Megahammer is televised at 9:55PM every Saturday. Results will be posted on their website Quicklotto.net.

There will also be radio announcements on Radio Nigeria FM stations nationwide every hour. The vendors/merchants carrying the QuickLotto POS terminal will also be alerted about the winning numbers.

Remember your game tickets are valid for 180 days (6 months). Any player who doesn’t come within that period to claim his prize loses his/her prize.

You can redeem your prize by visiting any of the Quicklotto vendors within the city of Abuja. You can also visit their head office located at Plot 160, 4th Avenue, Gwarinpa Estate, Abuja Nigeria to claim your prize.

You can also claim your wins at POS terminal also.

Make sure you visit any of their Partner banks nationwide or go to head office to claim your prize. note that the amount you can claim at retail units depends on the amount won. For prizes: Less than N25,000 NGN: Claim prizes form vendors; Greater than N25,000 NGN but less than N50,000 NGN and greater than N50,000 NGN: Collect cheque/cheques from quick lotto office: Plot 160, 4th Avenue, Gwarinpa Estate, Abuja Nigeria.

Also, you can now claim winnings, check result and play all quick lotto games on their app. Visit the google app store now and download.