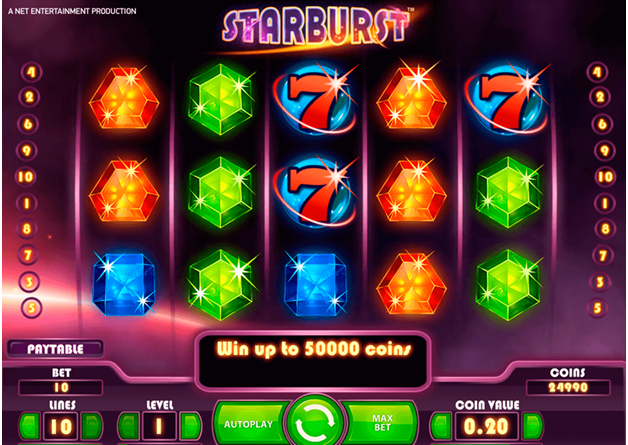 Starburst slot game is widely popular mobile slot game among punters around the globe. Developed by NetEnt this game offers awesome features and winning combinations. With 5-reels and 10-paylines this slot game could reward you with an amazing 50,000 coins regardless of whether you’re playing online at PC or on your mobile device. The slot game is themed on precious jewels which are just stunning to look at.  These vibrant and dazzling jewels are very colorful and you can see  colors of blue, purple, yellow, orange, and green shining brightly. You can play this slot game for free or with real money that depends on your choice.

As jewels are there in this slot game so obviously jewels are there as symbols. But you’ll also encounter bar symbols and 7 symbols as you play, which happen to be the two highest-paying symbols. Because there are plenty of features available on the Starburst slot machine, from a Win Both Ways feature to incredible Wilds, you’ll always be entertained whenever you decide to try your luck on this great game.

There is an autoplay feature, which allows you to sit back and watch the reels spin without having to click your mouse or press any buttons. You can even change various settings to control when you’d like the autoplay feature to stop.

Also there is a Skill Stop feature. This feature allows you to manually stop the reels with a single click of your mouse. Although the outcome of the spin is still determined randomly, there are many players who feel that having the ability to stop the reels allows them to control which symbols land on the reels.

Coin values on this game range from 0.01 to 1.00 and there are 10 different betting levels to choose from regardless of which coin value you select. While this game is technically considered to have just 10-paylines, it actually plays more like a 20-payline game because payouts can occur from left-to-right and right-to-left. Depending on your budget, you can bet as little as 0.10 or as much as 100.00 per spin.

This slot game has some of the wonderful features as well as two bonus rounds. They are of course the Starbust Wilds bonus round and the Win Both Ways bonus round. The first feature is activated whenever the wild symbols appear on the middle three reels. When this happens, they expand to fill the reels entirely with wilds and then a re-spin is awarded.

If you get an additional wild symbol during the re-spin, you will be awarded with yet another additional re-spin. Up to 5 re-spins can be awarded during this feature, which of course means that you’ll have the ability to generate some significant winnings if you’re able to have a decent bonus round.

The Win Both Ways bonus round it doesn’t matter which way a winning combination falls on the reels because you’ll be awarded with the corresponding payout regardless of whether the combination appears left-to-right or right-to-left. It’s better to read the slot game paytable if you’re interested in learning more about the different winning combinations or you can simply hover over each individual symbol on the reels to see payout information for each particular symbol.

Play for real or for real money

Starburst can be played all free with no Naira involved or play with real money at Nigerian friendly online casinos. Playing for free means you enjoy the online slots on your mobile anytime and understand the game before you start betting with real money. This means you can experience the various bonus features free of charge – giving you a golden opportunity to practice on the game for absolutely free. To launch a game in free mode, you simply need to do head to your favourite casino site and locate the game.