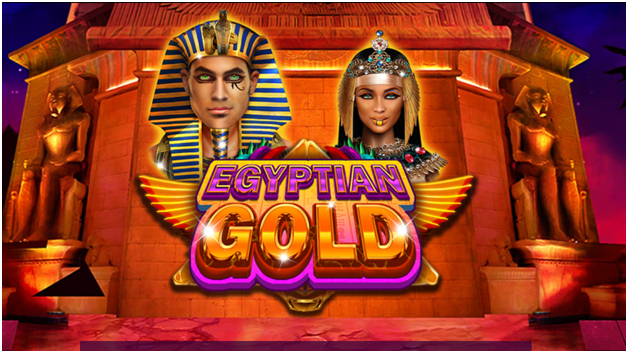 The best game to meet the Pharaohs and win rewards

Egyptian Gold is the new slot game released by Real Time Gaming now running at online casinos. With the Egyptian theme this slot is filled with treasures to explore and win. With 5 reels and up to 576 ways to win, Egyptian Gold is one of the richest slot releases yet, promising players a bounty of coins, Free Spins, and a jackpot worthy of Queen Cleopatra herself.

What is Egyptian Gold?

Egyptian Gold is a 5×3 slot with a pretty familiar setup. As the name makes it obvious, it’s a slot game based on an Ancient Egypt theme with decent graphics and animations. Egyptian Gold. has a rather familiar layout and design, so you can easily find the controls or the game’s guide if you need help with anything. This brand-new slot game is loaded with magical symbols, a mini, minor, major, and maxi jackpot, plus a mighty top reward of 96,000 the bet per line.

The symbols that are presented in the slot game are the following: card symbols, cobra, male and female pharaoh, the ankh symbol, a Scatter bonus logo (Eye of Horus), and the Wild pyramid symbol (substitutes for all symbols on the reels except for the Scatter symbol).

The features in the game include:

The scatter in this game is the Bonus logo which triggers the Free Pick Bonus feature when 3 appear anywhere on the reels. Once triggered, players have the opportunity to pick from one of three bonus rounds where an empire of prizes and bonus goodies await. The Wild Pyramid is the magic lever that adds an extra reel to the game, and becomes a Super Expanding Wild that increases the 243 all ways paylines to a whopping 576.

Players can choose from 5 unique bonus features when the lucky Scarab Random Feature triggers randomly on any given spin; Wild Reels, Random Reels, Magical Re-Spin, Free Games Pick Bonus, or a Jackpot Pick Bonus. The Scarab’s magical powers also unlock a Wild Reels Feature that drops extra Wild symbols onto the reels randomly to complete winning combinations. During the Magical Re-Spins Feature, the Scarab re-spins all of the reels to award players with a huge win.

How to play Egyptian Gold?

Once you’ve loaded the game, select your bet amount by selecting the + and – symbols at the bottom of the game screen. Once you’ve set your wager amount, click Spin. With a high volatility slot like Egyptian Gold, your best bet is to wager maximum coins. This sets you up for winning and being able to claim the game’s top reward.

If you find yourself getting a bit tired from spinning the reels manually, just hit the Autoplay feature to get the reels spinning automatically. From there, you can simply relax and watch the reels do all the work.

Note that the three scattered bonus can also trigger the Free Games Pick Bonus feature. Free Games are played at the bet of the triggering spin and the bet cannot be changed. Free Games will end once there are no more Free Games remaining or when the maximum payout is achieved. After all your Free Games have finished, a banner will display your total winnings achieved during this feature. There are three different free games bonuses and player can pick one option to play:

Triggering the bonus round or hitting the jackpot is the best way to win in the Egyptian Gold slot. Of course, the chances of that happening are not as big as this is an extremely volatile game. However, if you play with a proper strategy, you can hit nice wins frequently.

Know that the top prize is 96,000 times the bet per line and the game includes a Free Pick Bonus Feature where players can choose from one of three games options. Keep an eye out for the expanding Wilds on reels 3 along with the magical Scarab symbol that unlocks another 5 bonus rounds where you can pick up random Wilds, re-spins, Free Games, and even a Jackpot Pick Bonus

Yes, you can play Egyptian Gold slots for free at any RTG online casino in demo mode or for real money.

Q2. Does the Egyptian Gold slot have a free spin round?

Yes, it does. You can trigger it with 3 scatters, or it can be triggered randomly by the Scarab at the end of each spin.

Q3. How many options appear on screen when Jackpot Pick Bonus Feature is triggered?

During the Jackpot Pick Bonus 12 options appear on the screen. Selecting an option will reveal one symbol. When 3 identical symbols appear, the player is awarded a progressive amount (Mini, Minor, Major or Maxi) corresponding to the matching options.

Q4. What will I win playing this slot?

Q5. In which currency can I play Egyptian slot game?

You can play with your native currency.